On 18 May 2015, KERN-LIEBERS CHINA inaugurated a major extension at its plant in Taicang, just an hour's drive from Shanghai.

The ceremony was attended by representatives of local politicians, customers of Kern-Liebers and the administrative and management boards of KERN-LIEBERS, as well as a large number of employees.

It was addressed by Dr. Hans-Jochem Steim in his capacity as Chairman of the Administrative Board and co-partner of KERN-LIEBERS and as an honorary citizen of the city of Taicang. "With a sales volume of around 100 million euros, China is one of our most important markets and shows huge potential," said Steim in his speech. The Chairman of the Communist Party in Taicang, Mr Wang Jianfeng and the two Deputy-Mayors of the city of Taicang who attended, Ms Chen and Mr Zhun, expressed their appreciation for the sustained high level of investment and more than 20 years of commitment on the part of Kern-Liebers as the first German company in Taicang. Today, there are 200 German companies operating in Taicang.

Richard Zhang, General Manager of KERN-LIEBERS CHINA, thanked everybody involved for the timely completion of the 10,000 square meter extension.

The total area of 34,000 square meters is used to manufacture technologically sophisticated precision parts in the areas of wire springs, strip springs, stamped-bent parts and fineblanked and stamped parts, and to apply a range of different methods in the area of heat treatment.

A total of 750 employees work here.

On the same day, the new plant built by BRUKER-SPALECK CHINA in Taicang, with a production area of 6,000 square meters, was formally inaugurated. BRUKER-SPALECK is part of the KERN-LIEBERS group and produces specialty wires for the photovoltaic industry and rolled steel strip for many applications. BRUKER-SPALECK CHINA employs 60 people in Taicang. Jake Xiang, General Manager of BRUKER-SPALECK CHINA, welcomed numerous guests and pointed out the international customer relations his company maintains throughout the Asian region and as far afield as Mexico. 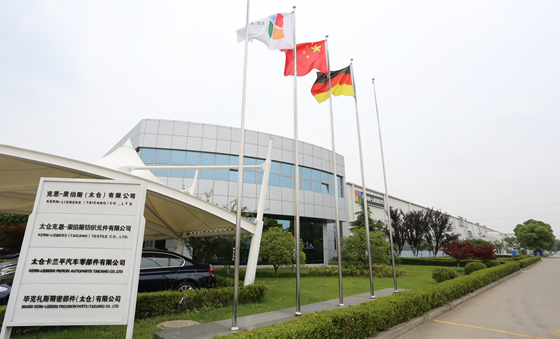