At the end of the financial year in June, the business development of the KERN-LIEBERS Group of Companies showed a satisfactory growth rate. For instance, the Group’s overall revenue in the financial year 2016/17, reaching 727 mio. €, was about 10% higher than in the year before (661 mio. €).

The biggest regional growth could be generated in Asia with a plus of 25%. In Europe (outside of Germany) the development is also positive, reaching a plus of 8%. Within Germany itself, revenue rose by 6% in comparison to the past financial year. And in Northern America, a growth of +4% could be realized.

For the new financial year 2017/18, KERN-LIEBERS plans to continue its growth trend. Numerous restarts and projects in all regions and all business sectors will back up this development. Despite of political uncertainties, the global economic condition finally stabilized and even accelerated towards the beginning of this year.

„Nevertheless, a strong global economic boost cannot be expected, since various structural barriers still exist. The risks of an economic-political reorientation in the USA are not specified enough yet and seem to be significant. Therefore we are optimistic but at the same time vigilant when looking ahead to the new financial year.“ says Dr. Udo Schnell, CEO of the KERN-LIEBERS Group.

To support the Group’s positive growth curve, KERN-LIEBERS carried out investments in new production facilities at its locations in the Czech Republic and Mexico. The foundation stone of a new plant at the subsidiary in Tianjin near Beijing / China with a production space of initially 15.000m² was laid in June.

The KERN-LIEBERS Group currently employs 7.442 people worldwide, thereof 3.464 based in Germany. Compared to the past year, this is a plus of 526 employees, 211 of which are new colleagues of the two sites of psm Protech, a company acquired in September 2016. At its headquarters in Schramberg-Sulgen, KERN-LIEBERS currently has 1.421 employees, which means an additional 57 employees as compared to the previous year.

Furthermore, 104 young people currently pursue a professional training at KERN-LIEBERS in Schramberg: 87 in the industrial, and 17 in the commercial sector. Regional trainee positions are also assigned at the nearby subsidiaries Bohnert and Carl Haas.

Like the graduates of previous years, the class of 2017 once again reached an excellent grade average of 1.3 (German grading system) within the industrial-technical sector.

After 4 Portuguese KERN-LIEBERS employees successfully completed their apprenticeship in the metal sector, a new international trainee program in cooperation with China will start this autumn.

The children’s day-care center Oberreute in Schramberg-Sulgen, opened in September 2014 as a joint project of KERN-LIEBERS and the City of Schramberg, is becoming more and more popular as modern facility. It offers full-time day-care for a total of 40 children. Meanwhile, the kindergarten as well as the nursery are fully booked. KERN-LIEBERS supports the center in order to promote the attractiveness  of Schramberg as a place of work. 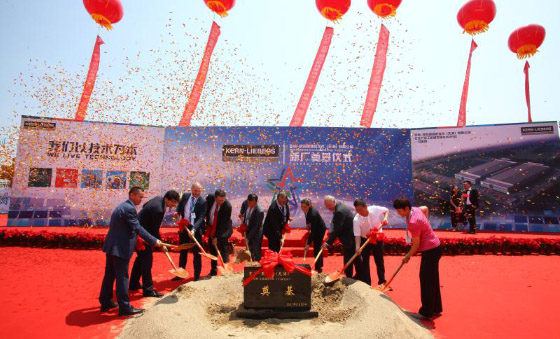