Employees and their family members invited to celebrate the company's 20th anniversary.

This October, KERN-LIEBERS India celebrated its 20th anniversary. For this event, Managing Director Felix Reichardt invited employees and their family members to the company premises in Tumkur. Various activities including sport events, cultural performances, and an awards ceremony were organized.

A day for the whole family

October 16th was a big day for KERN-LIEBERS India: To celebrate the company’s 20th anniversary, all employees were invited to the premises together with their families. Amongst the many fun activities organized for the event was a traditional Indian Rangoli Competition - an Indian art form where patterns are created on the floor using materials such as colored rice, dry flour, colored sand or flower petals. Employees also had the opportunity to show their talents in different sports competitions, singing and dancing performances.

Especially for the employees’ families guided plant tours were organized. Volunteers of all company areas showed them their workplaces and explained the different operation processes.

Another highlight of the event was the awards ceremony held by the senior leadership team. Employees were awarded for having spent 15 or 10 years in the company. Further awards included Six Sigma awards, and awards for participating in sports events.

The formal program started the traditional Indian way with the lighting of the lamp by the top management team, including Mr. Richard Bannmüller (chairman of the KERN-LIEBERS India board), and Mr. Felix Reichardt (Managing Director of KERN-LIEBERS India).

After Mr. Govindaraju NS (Head of Human Resources) welcomed all employees, Mr. Bannmüller talked about the company’s growth path over the past years. He thanked Dr. Hans-Jochem Steim, chairman of the supervisory board of KERN-LIEBERS, for his decision to invest in India. Both Dr. Hans-Jochem Steim and Dr. Udo Schnell (CEO of the KERN-LIEBERS Group) send their regards from Germany and wish all the best for the company’s future, Bannmüller said. He thanked all employees and families for the good cooperation over the last 20 years by saying “Ellarigu Dhanyavadagalu!” (Thank you everyone!).

KERN-LIEBERS India could reach its current level of success only with the support from its employees and their family members, Mr. Reichardt confirmed. The Managing Director of KERN-LIEBERS India then gave a short overview of the major steps in the company’s history. He concluded that he is quite optimistic KERN-LIEBERS India will continue to grow, even though there are challenges ahead.

Finally, Mr. Shashiprakasha LS (Head of the division S) stressed the importance of being able to change in order to survive in today’s world and motivated everyone to keep improving constantly. 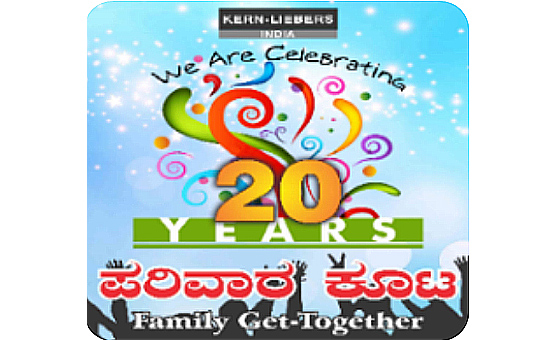